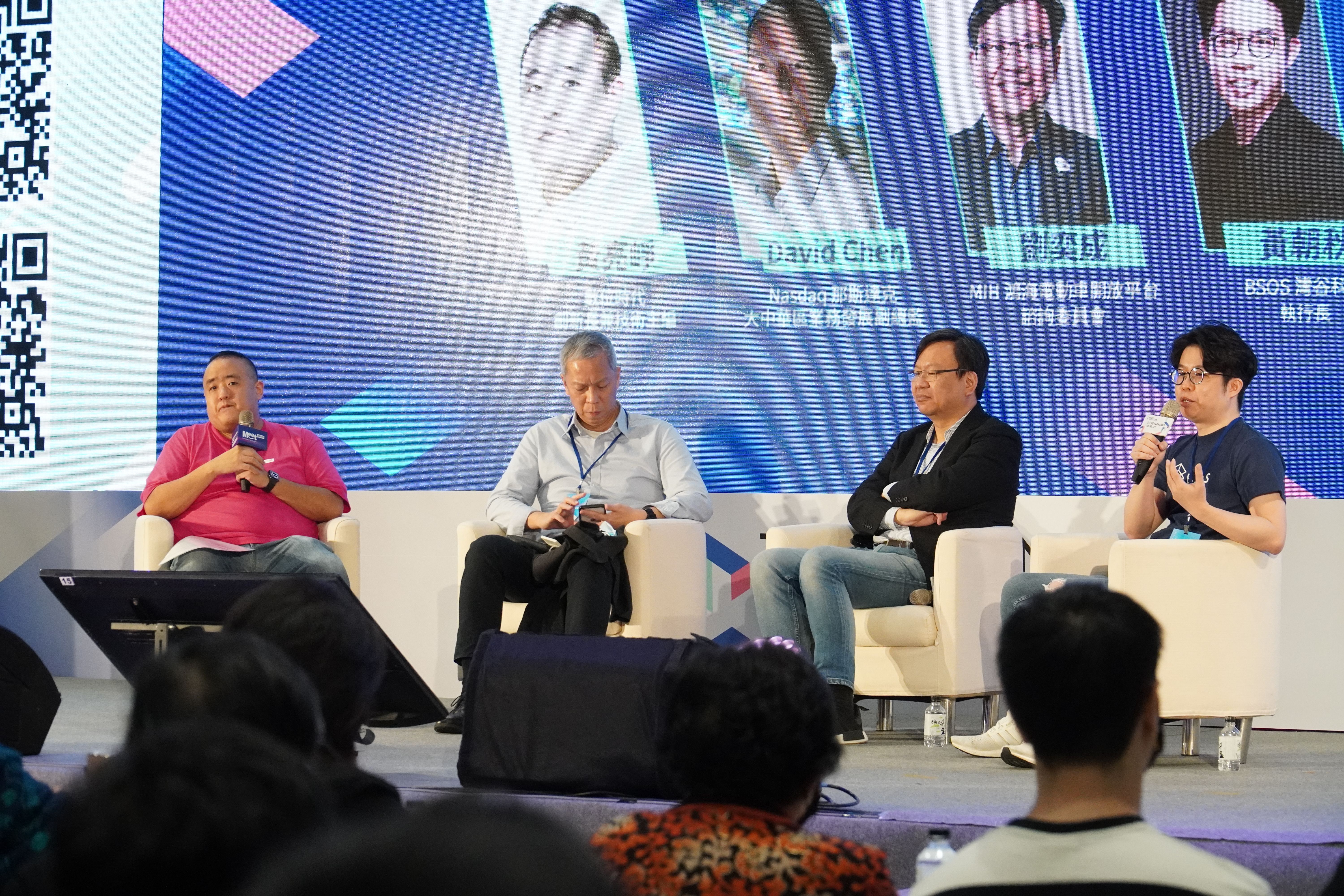 On the Super Stage is the panel discussion - How Asset Digitization Nurtures Supply Chain. The host is James, CIO of BusinessNext. “In addition to the well-known NFT and DeFi applications, blockchain applications are also very important for the supply chain. Especially in the past two years, we have seen Taiwan's supply chain have the power to influence the world." mentioned by James in the opening. The three panelists come from the international exchange Nasdaq, Foxconn MIH, and the blockchain company BSOS. This combination can not help but make people wonder how the industry giants use blockchain to improve efficiency? What is the future plan for digital asset trading?

In 2012, the United States promulgated the JOBS Act to encourage the stocks of startups in the United States to connect to the capital market for trading. Based on this ordinance, Nasdaq established a Private Equity Market in California in 2014, and Nasdaq Greater China Business Development Deputy Director David Chen mentioned: “In order to improve the efficiency of private stock trading for two weeks to one month, Nasdaq adopted blockchain as the underlying technology in 2016 and launched it in 2017.” In addition to private stock transactions, Nasdaq cooperated with the Singapore government in 2017 to complete the Ubin Project, which will be launched in 2020. The plan uses digitized assets and cryptocurrencies to achieve efficient cross-border trade settlement and clearing. It is not difficult to see that the leading international exchanges have already started experimentation and deployment in the field of digital asset trading.

IC Liu, the former general manager of the Next Bank, has been a pioneer in financial technology in the past. He is also a consultant of Foxcoon MIH. He started from the recent popular metaverse topic. The underlying logic of finance is nothing more than identity recognition and value exchange. In the universe, the identification and transaction mechanism will have a huge change, especially the virtual assets issued based on the blockchain will be widely used in the metaverse era. Back to the issue of supply chain, whether it is using public chain, private chain, or public chain plus private chain, what suppliers expect is a simpler settlement method. “Can’t the same currency be used for circulation?” In the traditional business world, the U.S. dollar plays this role. However, with the intervention of many institutions, the circulation loss is extremely high. “In the future, it will not necessarily be replaced by Bitcoin or Ethereum. A certain stable currency or digital asset recognized by the physical world. The development of blockchain technology makes the digitalization of assets feasible and makes the supply chain stronger!

"At present, the various financial services that everyone is familiar with are roughly formed in the past 50 to 70 years, and are based on the degree that technology can achieve in the past. However, the world has long been larger than we thought. Many digital constructions are under development, and supply chains need to be connected together to make each other more trustworthy and more circulated..” the host James Huang added.

Daniel Huang, CEO of BSOS, observed the opportunity of "circulation on the physical asset chain" from two phenomena: "Currently, the total market value of cryptocurrencies is about 2.5 trillion U.S. dollars, and among the physical assets, the bond market category alone is as high as 300 trillion U.S. dollars." The value that can be circulated in the blockchain world has not yet been developed; "Another data is that at the beginning of 2020, the issuance of US dollar stablecoins on the blockchain was about US$3 billion. In less than two years, it has reached 100 billion - it has increased more than 30 times. This represents the trend of wealth transfer. More and more U.S. dollars are eager to purchase assets on the blockchain. In addition to highly volatile virtual currencies, digitized physical assets will be an important export of US dollar stablecoins, such as digital assets issued on the basis of supply chain accounts receivable. BSOS CEO Daniel believes that traditional methods are often unable to solve the supply chain's demand for funds immediately in terms of efficiency. The strengths of blockchain are transaction efficiency and liquidity. These problems will be greatly improved in the next few years.

Also, David showed the Nasdaq’s survey data, which echoed "The digital assets that global institutional investors are willing to hold at the beginning of 2020 accounted for about 3 to 5% of the total assets. By the beginning of this year, it had increased to 5 to 8%. This is a significant change." From the perspective of investment institutions, we can see that the traditional world is gradually accepting digital assets.

The industry will play an important role in supply chain finance

The most important thing for the digital circulation of supply chain accounts receivable is the verification of the accounts by supply chain buyers. A supply chain with a higher digitization is bound to gain an advantage, and can dominate the industry’s finance behavior, which the role of the bank will be downplayed.

IC Liu, who is good at giving examples, said, "You can imagine that you are an employee of a certain company. Before the end of the month, the company has a "payable salary" for you. When you want to buy a gift for your wife, the old way is to go to the bank for credit. Now the system can prove that you have not received a salary after working for a month. As long as you have this data, you can borrow money with confidence.” IC Liu went on to say, “This is the trend in the world, including Tesla. Therefore, MIH invites electric vehicle suppliers from all over the world to form an alliance. Members can receive digital support and assistance in terms of information, logistics and funds. This is a vision and there is a lot of imagination in the future!"

Daniel Huang also took the shining Fintech star Pipe as an example. Pipe’s customers are from SaaS companies, and their customers use the predictable subscription income to raise funds on the Pipe platform. This is exactly the demonstration of industry data dominating finance; and part of the funds on the Pipe platform comes from decentralized financial services (DeFi).

What should we prepare for the arrived future

In the end, IC Liu concluded that in the next 15 to 20 years, blockchain will affect the rules of the financial game, whether it is native cryptocurrency or digital physical assets. It is recommended that we should research boldly and invest carefully; Daniel Huang said that enterprises should open their minds and embrace the new technology. It is part of the digital transformation; David Chen saw the policy-led approach of Singapore, South Korea, and Hong Kong from an international perspective. Taiwan is also an economic form dominated by foreign trade and it requires a national-level strategy, cooperating with institutions to drive the development of digital finance as a whole.